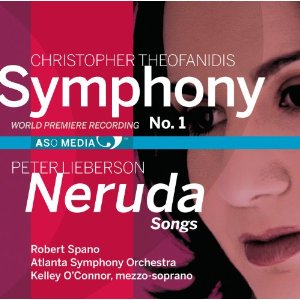 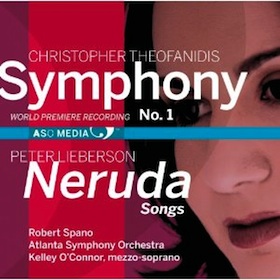 The Atlanta Symphony Orchestra has released the second recording on its own in-house label, ASO Media.The first recording featured Robert Spano (currently celebrating his tenth anniversary as the orchestra’s Music Director) conducting two ASO commissions: Pulitzer Prize-winning composer Jennifer Higdon’s concerto On A Wire, featuring the chamber ensemble eighth blackbird, and Michael Gandolfi’s choral work QED: Engaging Richard Feynman, with the Atlanta Symphony Orchestra Chorus.  This newest release includes Theofandis’s Symphony No. 1 and Lieberson’s Neruda Songs.  Mr. Theofanidis’s Symphony No. 1 was commissioned by the Atlanta Symphony Orchestra with the generous participation of the Savannah Music Festival and the Immanuel & Helen Olshan Texas Music Festival. Mr. Spano led the world premiere at Atlanta Symphony Hall in April 2009.  Mr. Lieberson’s Neruda Songs are performed by mezz-soprano, Kelley O’Connor. Ms. O’Connor was the first artist to perform Mr. Lieberson’s Neruda Songs after the death of his wife, Lorraine Hunt Lieberson. She has since performed the work with numerous orchestras around the world, including the Chicago Symphony, Berlin Philharmonic, Tonhalle-Orchester Zürich, Los Angeles Philharmonic, and in Edinburgh, Scotland, in April 2011, the week following the composer’s death. Mr. Spano led Ms. O’Connor in the work at Atlanta Symphony Hall last summer in June 2010. Of their on- going collaboration, she has said: “Whenever I perform with Robert Spano, it is as if we are composing the music at that exact moment. Yes, it existed before, but this is our version; we lovingly create it together and send it out into the world. There is a certain intimacy in performance that comes from sharing a musical language, and it is so special when the audience joins us in this experience.”  You can read an ASO press release about the recording here: