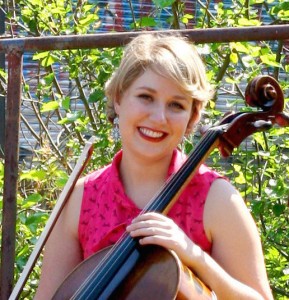 Mary Horst (2006, 2007, 2008) has been coaching quartets at Drew Charter School for Franklin Pond. The kids love her, and we are so happy she is working with us. Mary is a wonderful cellist and teacher, and we are lucky that she came back to Atlanta to work…for now anyway!

Mary’s father, Eddie (now deceased), was a very well-known composer and producer of music for film, television, recording artists, and video games. He wrote arrangements for artists including Bruce Springstein, Pearl Jam, Natalie Cole, and R.E.M. Among many other accomplishments, he wrote music for Cartoon Network and the television series “In the Heat of the Night”. Eddie wrote a string quartet (“Insecta”) for Franklin Pond, which was all about the bugs of Franklin Pond. Mary played it with her high school quartet at a concert at Jimmy Carter Center, and on several other concerts. Franklin Pond has enjoyed using it on both student and faculty concerts. Eddie and his wife, Patti were a joy to have as chaperones on one of our Jekyll Island retreats. We miss Eddie dearly, and are so proud of Mary!