The day started early with the Vega performing parts of Haydn, Beethoven, and Bartok as the students listened.  Then there was discussion about rehearsal and performance techniques.  In the late morning the students broke into their groups and had coaching until lunch.  After lunch there were more coaching sessions, then a master class in Schwartz Hall when each student group performed one of their movements for the whole group and each member of the Vega Quartet commented on the performance.  It was a wonderful experience for the students to perform in a good hall early in their training.  They left that day inspired and with a good idea of what they needed to work on.

Some photos of the day follow below.  Domenic Salerni is the new 1st violinst with the Vega Quartet and a former student of Bill Preucil at Cleveland Institute.  In one picture he is sitting with the Franklin Pond students in the 2nd violin spot playing with them. In the other, obviously, he is coaching the whole group.  He worked with the quintet (Gabriel Bellott-McGrath & Philip Lan violins, Noah Johnson cello, Nicholas Lindell and Michael Cao viola.)  He challenged them early, starting off by playing Bach Chorales together for intonation and blending. The quintet worked in Schwartz Hall and the other three groups split up with the other members of the Vega Quartet in various studio rooms.

THANK YOU to Emory University, the Vega Quartet and the people at Schwarz Hall for a spectacular day. 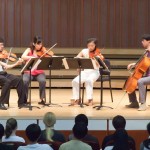 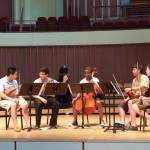 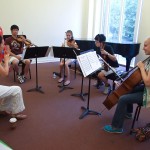 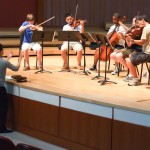 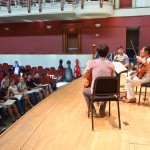 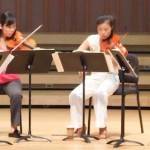