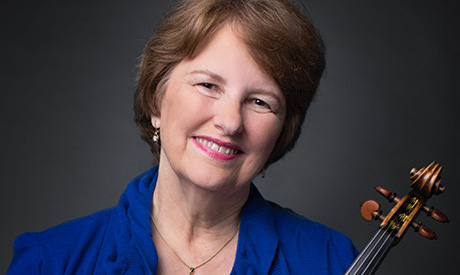 RONDA RESPESS (violin, President and Artistic Director of Franklin Pond) has been recognized for her active role in the Atlanta Symphony Orchestra’s outreach programs by being named to the UPS Community Service Chair. Deeply committed to education, she teaches privately, gives masterclasses, coaches chamber music, and is a long-time coach of the Atlanta Symphony Youth Orchestra.

In cooperation with WGTV and the Atlanta Symphony Orchestra, she filmed a teaching video called “Instrumental Success”. She is founder and artistic director of Franklin Pond Chamber Music, a year-around chamber music program in Atlanta for talented young musicians. In 2007 Ronda received the Loridans Arts Award given in honor of her work with Franklin Pond and the Atlanta Symphony Orchestra. As a former teaching affiliate at Emory University, she has performed in several chamber-music concerts there and around the city. She also served as Principal Second Violin of the Atlanta Opera for eight years.

Respess, a New Jersey native, took lessons from Samuel Applebaum, and as the high school winner of the New Jersey Music Educators Association Solo Competition, she played a recital in Carnegie Recital Hall. She went on to study with Sally Thomas and Ivan Galamian in New York, then received her Bachelor of Music in Violin Performance from Indiana University as a student of Daniel Guilet and Josef Gingold. She also had chamber music coaching with Janos Starker and William Primrose at Indiana University and Walter Trampler at the Sarasota Music Festival.

After winning a position with the Atlanta Symphony Orchestra she continued her study in Florida with Richard Burgin and did graduate work toward a Masters in Music Education at Georgia State University. In 2013, Respess was elected to the Board of the ASO. She is the mother of Virginia Respess Fairchild, a professional violinist now working in Atlanta, and adopted mother to two dogs.