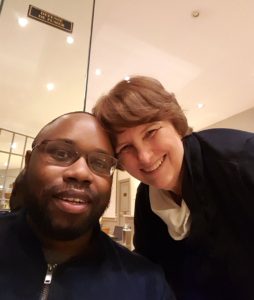 Ronda met up with two Franklin Pond alums in Paris! Chris Dalton and Grayson Fuller have been there for over two years.

Chris Dalton (2005) graduated from Berklee College of Music in Boston and started traveling around the world, working in one place and learning the language and culture, while earning the money to travel somewhere else (with his viola of course!)). He has always had a global mindset and speaks about seven languages, Unfortunately, the evening of his Paris arrival, he was caught in the Paris nightclub shootings. He was sitting at the cafe and saved his life only because he crawled behind the bar when the shooting started. He did get shot in the foot with a lot of shrapnel lodged in his legs and right hand. He spent a long time in the hospital and is still, 2+ years later, getting treatment. Since then he has become a French citizen with dual citizenship. Despite his bad luck start, he still loves Paris and is hoping to be able to play viola again soon. 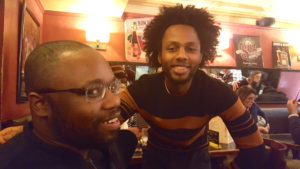 Grayson Fuller (2010) graduated from Harvard in Latin American Studies, but ended up in Paris for a work and school opportunity.  He says he is  “working in sustainable development, which is basically development that doesn’t impede future generations’ livelihood – practically speaking it’s like a mix between public policy and international affairs. I was doing a masters here as well before I started working. In Paris I’ve been playing with my school’s orchestra for the last two years.” Grayson still loves playing chamber music which he did throughout his Harvard years.