We received a wonderful e-mail about one of our alums, John Grigsby (2010), from his viola teacher in Houston, the world-renowned James Dunham. He said that moving to Houston from Atlanta right after his summer at Franklin Pond was difficult for John. “It was hard leaving behind many beloved things including Franklin Pond, the ASYO, his teacher, and many excellent friends.” John auditioned for James Dunham at Rice University and “lessons were always a high point for him.” 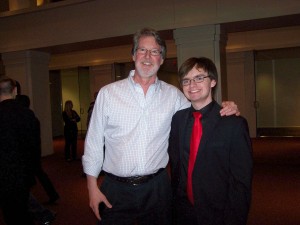 “Then he went to Domaine Forget (International Music Festival in Quebec) last summer and had the most fantastic time with new friends, all of whom played at his level or above, great community, great music and great faculty. He was transformed! I hadn’t seen a smile like that on his face all year: open, relaxed, excited!”

“This year has been fabulous: my former high school student graduated and went to Juilliard, opening up the principal position in the Houston Youth Orchestra (HYS). John promptly won it and has kept it all year. His college auditions went wonderfully. He was accepted to CIM (Jeff Irvine), Vanderbilt (Kathryn Plummer), and Mannes (Daniel Panner).

In addition to the HYS orchestra, there is also an HYS chamber music program. John learned and performed the entire Death and the Maiden with his friends, BUT he also wrote one movement of his own string quartet (opus 1!), which they performed on the HYS chamber music concert. It’s a very good piece; a bit romantic to begin, then quite rhythmic and complex as it goes along! He was thrilled, of course, but the audience reaction was so special – lots of cheering and screaming from the friends and family in the audience.”

We at Franlin Pond are so proud of John and all of our alumni and enjoy following them throughout their school and professional years. Bravo John!