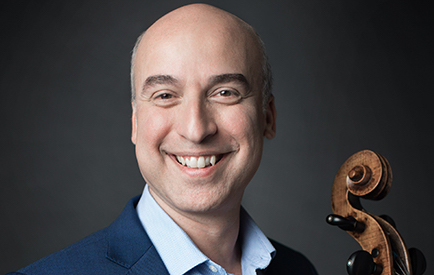 DANIEL LAUFER (cello) is the Associate Principal Cellist of the Atlanta Symphony Orchestra (since 1991).

Daniel Laufer began studying cello with his father, Wolfgang Laufer, former cellist of the Fine Arts Quartet. He attended the North Carolina School of the Arts, where he studied with Robert Marsh and performed as a soloist and chamber musician on two European tours with the International Music Program. Laufer continued his studies with his father and mother at the University of Wisconsin in Milwaukee. He won a section position with the Dallas Symphony Orchestra (DSO) at age 18 and joined a year later under Eduardo Mata. After two years with the DSO, Mr. Laufer joined the ASO as the Associate Principal Cello.

As soloist, Mr. Laufer performed and recorded in 1991 Ott’s Concerto for Two Cellos with his father and the Milwaukee Symphony Orchestra for the Koss label. Other solo performances have taken place with the Dallas Symphony, a number of appearances with the Atlanta Symphony Orchestra, and numerous community orchestras over the years.

Since 2012, Mr. Laufer has enjoyed being associated with the Grand Teton Music Festival as Principal Cellist under Maestro Donald Runnicles and enjoying chamber music performances at the summer festival.