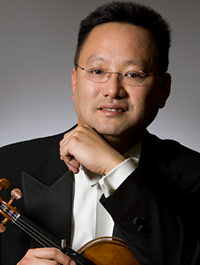 Jun-Ching Lin, violin
The Atlanta Symphony’s Assistant Concertmaster since 1988, Jun-Ching Lin was concertmaster of the Augusta Symphony Orchestra for a year before coming to Atlanta. He has performed violin concertos and solos by Barber, Beethoven, Vivaldi, and Tchaikovsky with the ASO. An affiliate artist faculty member at Emory University in violin and chamber music, he coaches the first violins of the Atlanta Symphony Youth Orchestra and spends part of each summer teaching at Encore School for Strings and Franklin Pond Chamber Music. Very active as a chamber musician, he has participated in festivals in Highlands-Cashiers, North Carolina, and in California at La Jolla, Palm Beach, and San Diego.

Born in Taipei, Taiwan, Mr. Lin grew up in Boston. As a high-school senior, he was one of the first Presidential Scholars in the Arts. He earned degrees at the Curtis and Cleveland Institutes of Music, studying with Ivan Galamian, Jascha Brodsky, and David Cerone. He was a semi-finalist in both the Montreal Competition and the Naumburg Violin Competition.

Mr. Lin enjoys playing racquetball, golf, bridge, and other card games with his ASO colleagues. He and his wife Helen Porter have two children, Emma and Nicholas. 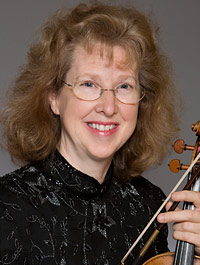 Carolyn Hancock, violin
Carolyn Toll Hancock (violin) joined the Atlanta Symphony Orchestra violin section in 1985. She studied with Dorothy DeLay and her assistants while obtaining her Bachelor of Music degree at the Philadelphia College of Performing Arts then went on to receive a Master’s Degree at Indiana University under Yuval Yaron and James Buswell. In 1981 she was a fellow at the Aspen Music Festival. Since that time she has performed numerous chamber music and solo recitals in and around Atlanta as well as recorded with the Atlanta Chamber Players and the Nashville Chamber Orchestra.

Carolyn is presently Concertmaster of the Chamber Orchestra of Tennessee. She is a co-founder of Chamber Music Atlanta, an organization that contracts musicians for churches, business, weddings, and other events in and around the Atlanta metropolitan area. 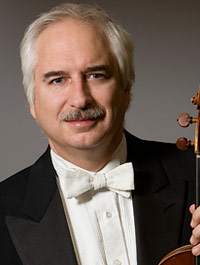 Paul Murphy, viola
Paul Murphy is the Associate Principal Viola with the Atlanta Symphony Orchestra, holder of the Mary and Lawrence Gellerstedt Chair.Previously he held principal positions with the Minnesota Orchestra,Kansas City Philharmonic, and Caracas (Venezuela) Philharmonic and was a regular player with the St. Louis Symphony. He has also performed as Guest Principal for the Boston Symphony Orchestra.

Mr. Murphy is a native of Pensacola, Florida, where he studied with the renowned Anna Tringas. He later graduated from the Cleveland Institute of Music where his principal teachers were David Cerone and Robert Vernon. During college he also served as an assistant teacher at the prestigious Meadowmount School of Music.

Mr. Murphy is an Artist Affiliate at Emory University and a Distinguished Artist at Mercer University inMacon, Georgia. He can be heard in chamber-music performances on the Innova, GM, Arundax, and ACA labels and is a featured performer on the short children’s film The Orchestra Gets Dressed. On a different note,he has recorded extensively with the rock bands R.E.M. and Collective Soul, and has also worked with Stone Temple Pilots, Indigo Girls,Usher, and Outkast. 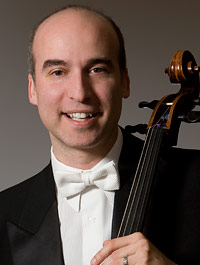 Daniel Laufer, cello
The Atlanta Symphony Orchestra’s Associate Principal Cello since 1991,Daniel Laufer was born in Israel, where he started playing the cello at age eleven, studying with his father, Wolfgang Laufer, cellist of the Fine Arts Quartet. He attended the North Carolina School of the Arts,where he studied with Robert Marsh and performed as a soloist and chamber musician on two European tours with the International Music Program. He continued his studies with his father and mother at the University of Wisconsin in Milwaukee. At age 19, he joined the Dallas Symphony Orchestra, and two years later he was asked to join the ASO.

Mr.Laufer has given recitals in Milwaukee, Madison, Dallas, Boston, and Atlanta, as well as live recitals for radio on WFMT in Chicago. He has performed as soloist with the Dallas and Atlanta Symphony Orchestras,as well as community and university orchestras in Georgia and Wisconsin. In 1991, he and his father performed the Concerto for Two Cellos by David Ott with the Milwaukee Symphony Orchestra and recorded it on the Koss label.

A regular performer with chamber music ensembles in and outside of Atlanta, Mr. Laufer was a founding member of the Emory Chamber Music Society of Atlanta and has collaborated in chamber music with Yo-Yo Ma, Sadao Harada, Robert Spano, and Alan Gilbert,among others. He has also performed on a number of occasions with the Fine Arts Quartet and their guests, including Pinchas Zukerman.

When Mr. Laufer performed with the Michael O’Neal singers Donald McCullough’s Holocaust Cantata: Songs from the Camps. Pierre Ruhe of the Atlanta Journal-Constitution wrote, “Throughout the cantata, a lone cello plays a prominent role: weeping, protesting, keeping vigil,offering almost a running commentary on the texts. Atlanta Symphony cellist Daniel Laufer brought deep understanding to the music and, in vibrato and tone, sang with his cello like a wise old folk singer – someone who needed to be listened to. Along with O’Neal’s beautifully nuanced and balanced choir, he was the star of the evening.”